The World-Famous Harlem Globetrotters returned to Pennsylvania to showcase their skills for an audience of all ages. As the official charity partner of the Harlem Globetrotters, American Red Cross volunteers enjoyed watching the game and participating in the “pass-the-bucket,” a fundraising effort for the Red Cross.

The Globies played the Washington Generals in the game I attended, and after four enjoyable quarters, the Globetrotters proved to be the victors. This was my first Harlem Globetrotters game and I was amazed and entertained just as much as the group of 5-8 year-old girl dancers seated behind me.

As a relatively new volunteer to the Red Cross, my main priority was to assist with the “pass-the-bucket” portion of the program at the start of the third quarter. Because my section was easily accessible from the court, I doubled as an on-court promoter for the fundraiser. My job wasn’t complicated, but I had a few butterflies since I would be in front of close to 7,000 people including my dad and brother who were in the crowd. Luckily, my nerves were quickly put to rest thanks to the incredible team of Red Cross staff and volunteers who were there with me. Everyone was kind and willing to help answer questions. 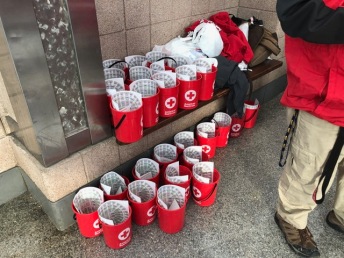 The game started around 5:30pm after both teams came out onto the court. The Globetrotters gave multiple shout-outs to the World Champion Eagles, which the crowd adored since it was the one-month anniversary of the historic Super Bowl win.

As a “retired” basketball player, the game kept me entertained and in awe from start to finish. The tricks were incredible, the agility of the players was inspiring and the crowd participation was both comical and engaging.

Towards the end of the second quarter, I made my way from me section to the Red Cross table in the lobby to meet the volunteers assigned to be on-court promoters during the Red Cross announcement. As we waited for our cue, we could watch the halftime show, which featured local dance teams. Once it was our cue to head on the court, we showcased the buckets to remind the crowd what to look for as the announcer spoke on the importance of the Red Cross and the impact it has on the region. As I walked off the court, two small children rushed towards me to drop their dollars in my bucket. After that came the surge of other children and adults alike waiting to do the same. The majority of the audience was eager to give what they could from $5 and $10 to coins. All of the donations will help the American Red Cross and the communities it serves to prepare for, respond to and recover from disasters big and small.

After ensuring that I had collected from all who wanted to give, I turned my bucket in and headed back to my seat to finish the game. My favorite part was when one of the Washington Generals players “fixed” the scoreboard in favor of them ending with an over 100-point lead. It felt good to “boo” them with the rest of the crowd and laugh when they finally lost at the end. Another favorite was the Globetrotters showcasing their female players. The two current women on the team are the 14th and 15th women to wear the Harlem Globetrotters jersey. What made the moment special was that one of the women, Swish (Bria) Young, hails from Philadelphia. The event was so much fun and a great experience supporting a great organization.